These are my sketches from the period before the COVID 19 lockdown. 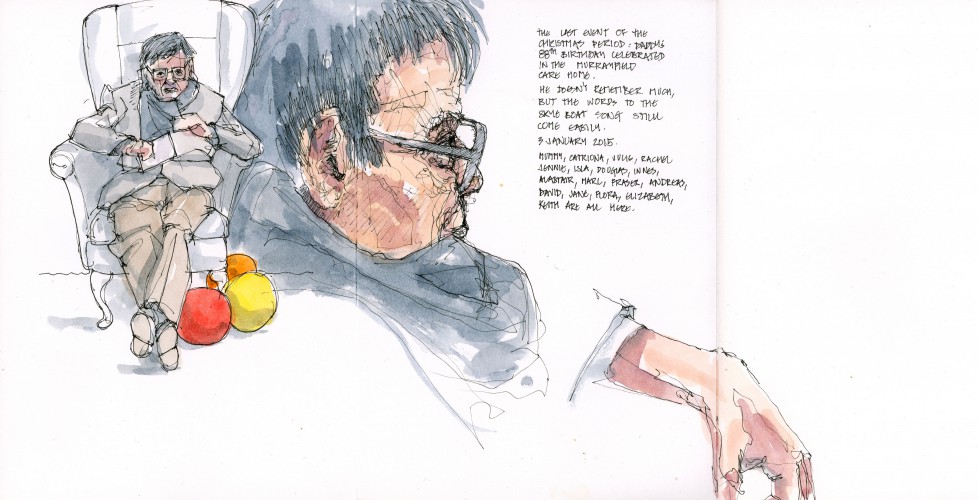 The last event of the break, my dad’s 88th birthday. 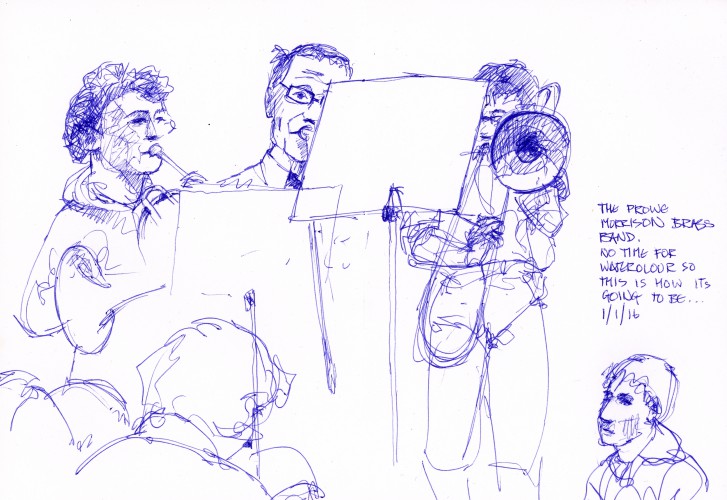 New years day, a brass band in the livingroom. 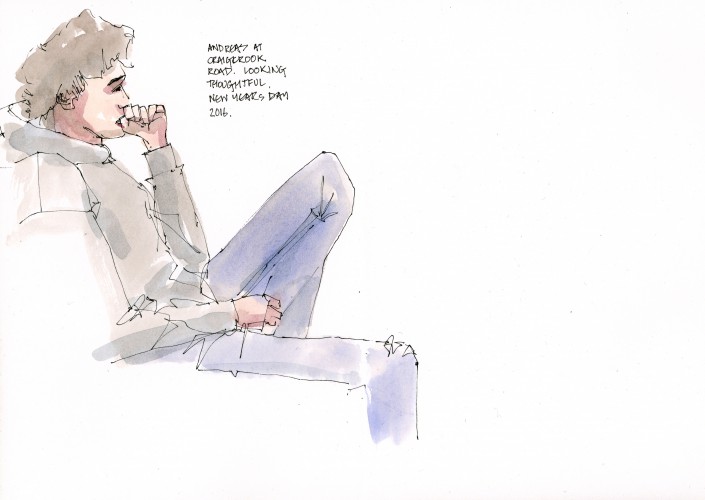 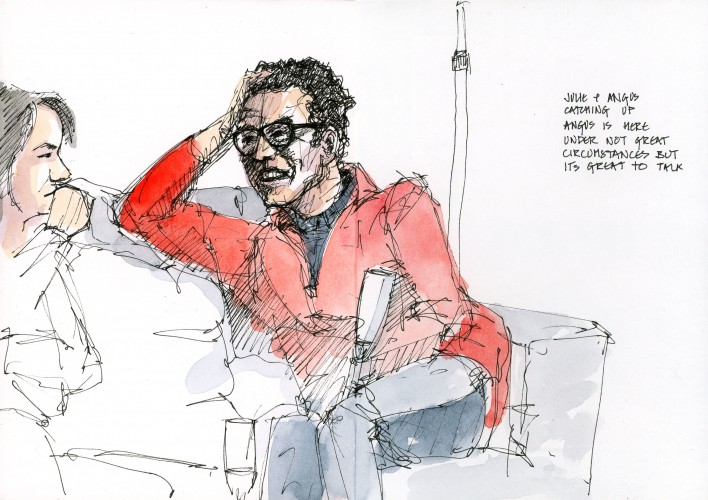 Catching up with old school pals in Dunfermline. The same as we were, a little more tired but a little better at communication.

Innes hid behind the sofa for the Queen’s speech. 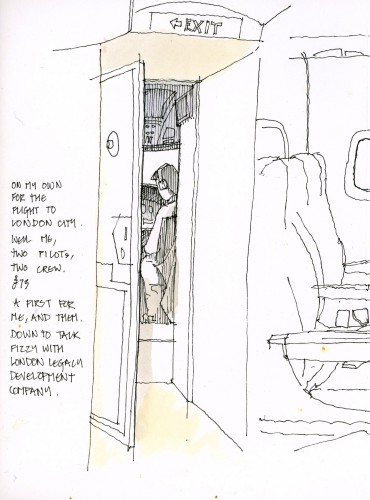 The only person on a plane to London City the week before Christmas.

Actually these are the things I did in between riding the bike and painting portraits, in preparation for cycling from London to Cannes in March. I’ll show you the portraits next time.

Fraser is learning to play tennis.  I drew Isla watching him, then she drew him, and titled it. 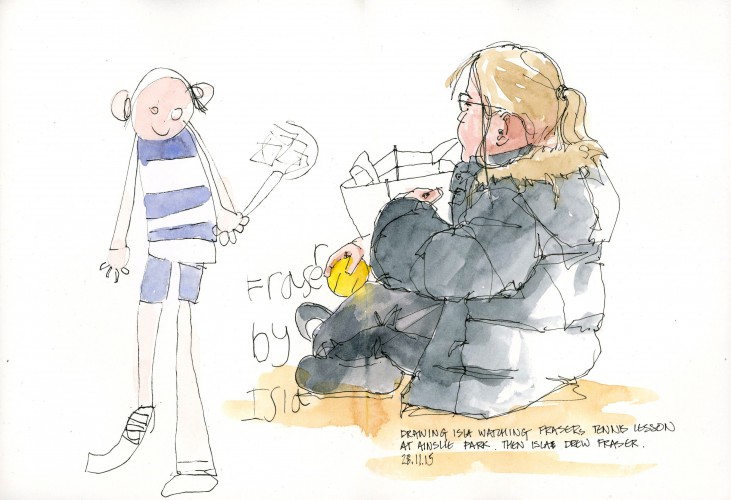 At an office CPD, on lighting. Not a bad one.

You learn more, obviously, from seeing the things skilled designers (and their visionary clients) have actually built than you do from watching Powerpoint.

Edinburgh has an extensive stock of ageing bungalows with big back gardens and they’re gradually being bought up by young families. A roster of talented local architects can transform them by taking a bit of back garden and building the kind of bright and open living space people are after these days. Few are as lofty and light as friends Asa & Daniel’s one, by David Blaikie. 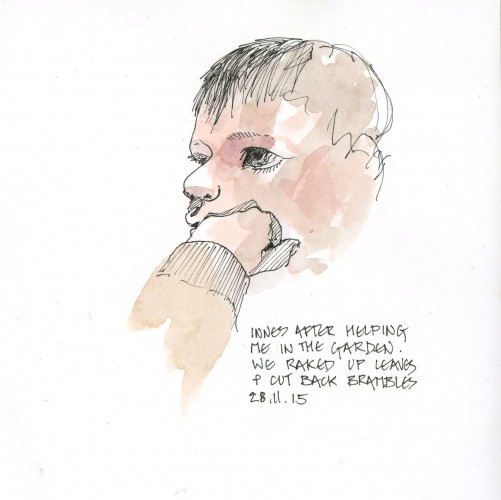 Innes (and me), learning to be gardeners.

Talking to the PRS Forum about the differences between placemaking for Private Rent and placemaking for sale. There are more than you’d think, so I had to be selective in my ten minute slot. 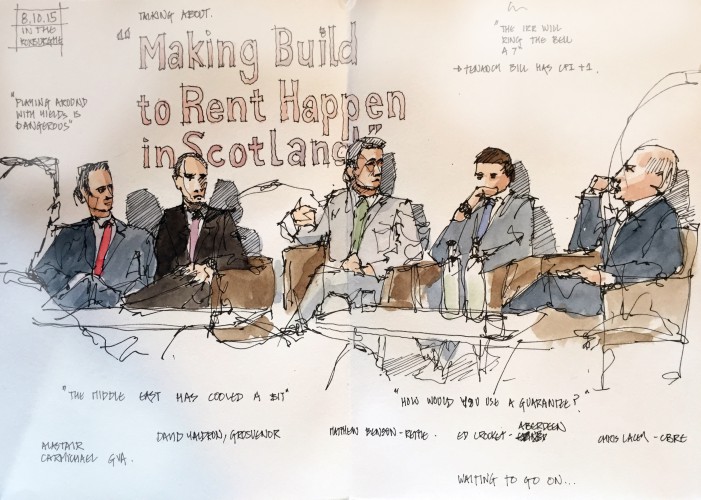 I listened hard to the session before, trying to work out what the most relevant things were to talk about. I noted down “the IRR will ring the bell at 7” but mostly so I can ask my more financially fluent colleagues what that means. 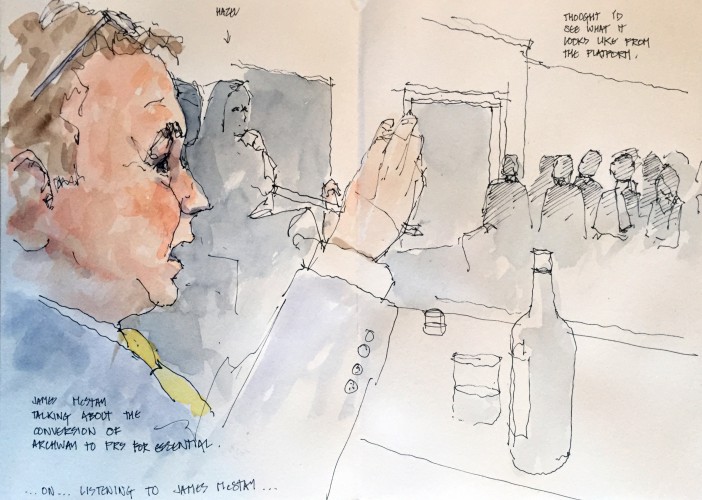 Sketching on stage. I’ve not done that before. I’m happy listening and drawing, so I think that’s ok. 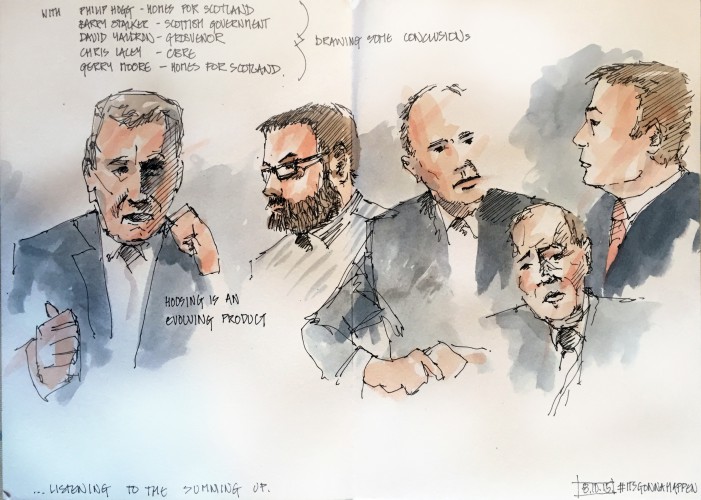 Afterwards, listening to the summing up. Regulatory uncertainty outweighed by confidence in the concept I think. Thanks to Grosvenor and Movers & Shakers for asking me along.

This little band came together to support singer Helene’s songs about her time on the streets of London and Paris. Emotional in the broadest sense, beautifully delivered.

Review by others here. Tickets here.

Sitting In Advocate’s Close admiring Morgan McDonnell’s sensitive modern buildings on medieval steps. A design from a couple of years ago sitting comfortably on a route from 600 years ago. 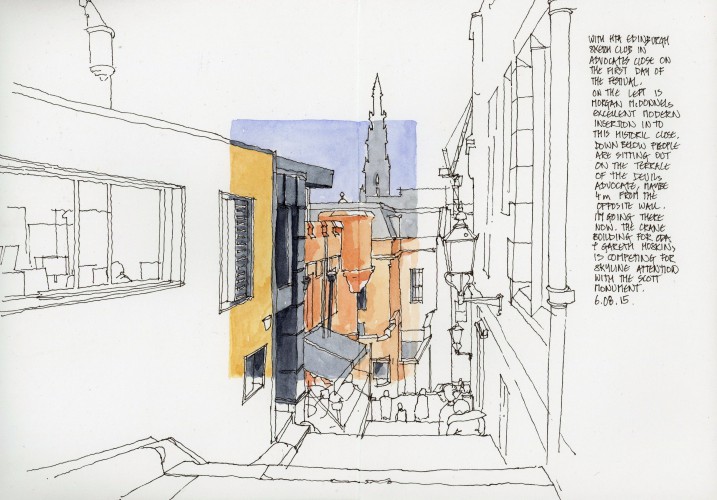 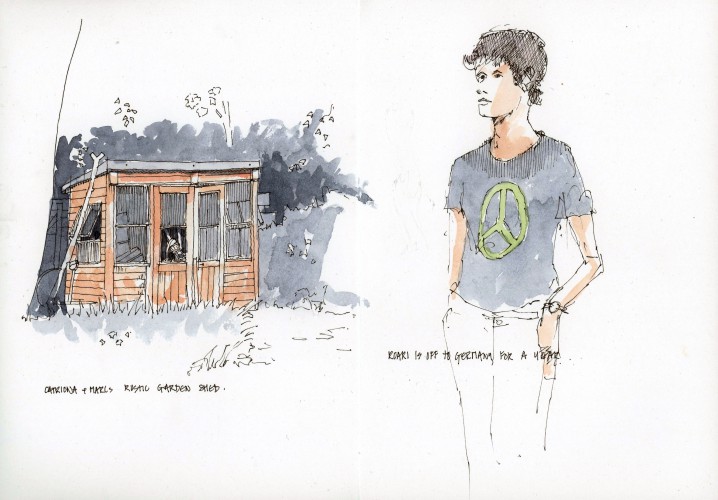 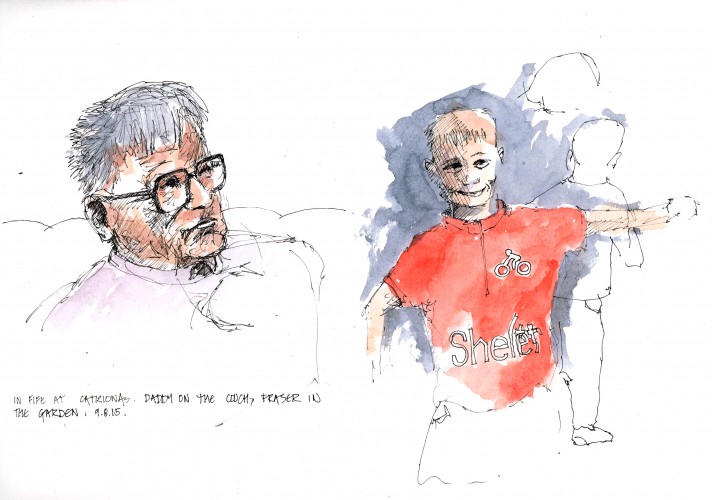 Sometimes, more than others, you feel that time is moving on.

Work is about making things and sketching is about learning from some of the great things others have made. A week spent looking at inspiring and dramatic development. 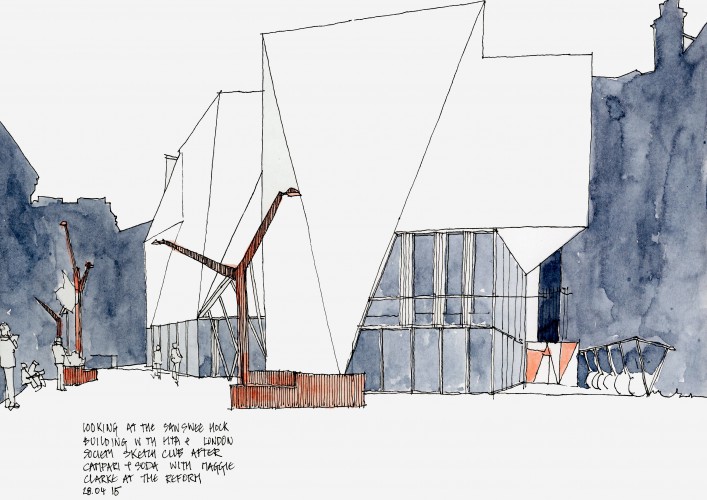 This is O’Donnell & Tuomey’s Saw Swee Hock Building for the London School of Economics, more drama than you’d think would fit on such a tight site.

Victoria Street in Edinburgh, linking the Grass Market with George IV Bridge in spectacular fashion. A six storey pedestrian street sitting on a lower level that climbs from single storey to three storeys whilst looking like a crescent but mostly running straight. Other sketches of these two locations should be here. 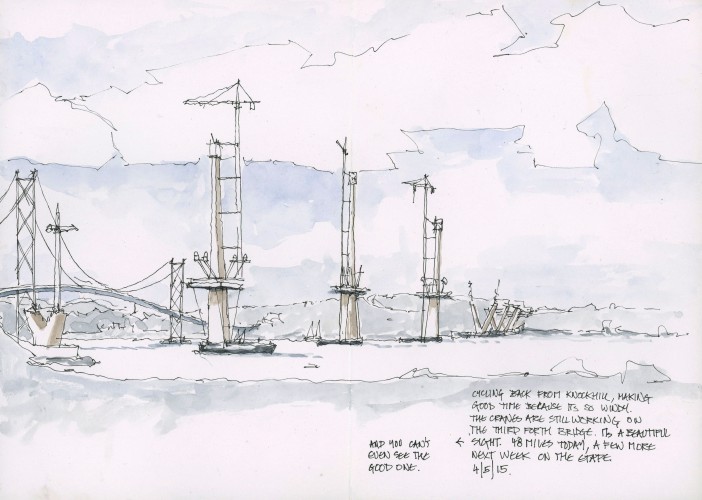 Most spectacular of all, the dramatic construction of the third Forth Bridge.

With the kids at soft play. The flags and pennants are on the Britannia outside. 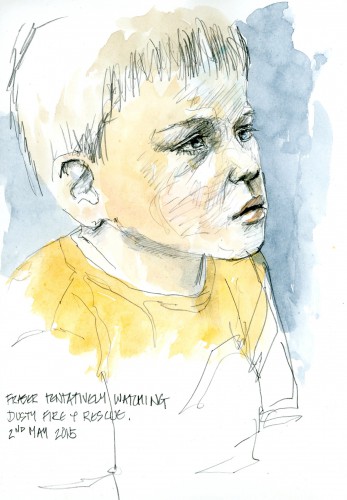 Fraser watching a Dusty drama. The next few days will see drama too, as our political parties try to sort out a hung parliament. I’ve just realised that most people don’t realise that Nicola Sturgeon, the undoubted star of the whole process, isn’t actually standing. Dramatic days ahead.

For one and a half hours I had a shot at being a nursery school teacher. They knew I was coming so made it like the day job: we drew what we wanted, then we built it. 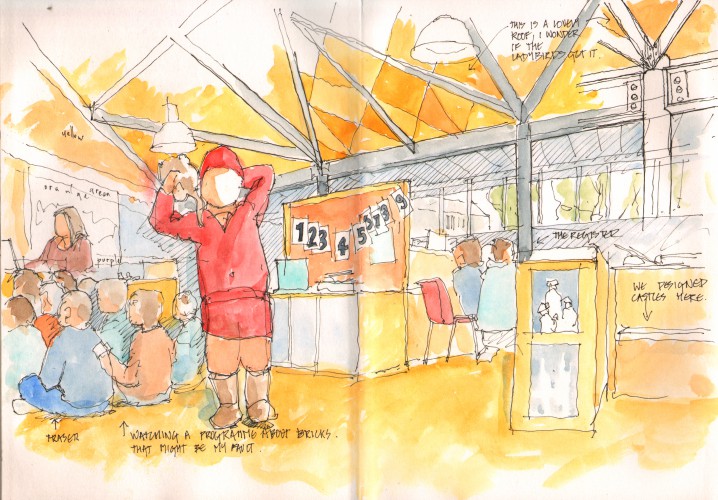 Two castles and a treasure map, then some dragons. Then, like actual lunchtime CPD, they watched a programme about bricks: grow you’re own clients. Great fun, and thanks to the kids who chose not to bully me at all.

A cyclist turns up at the consultation – 12 February 2015

For the first time this year, the sun has made it over the horizon in time for my morning commute. The number of cyclists seems appreciably up from the dark winter months.

In the evening I popped passed Grosvenor’s smart consultation event and had a chat with a fellow user about annual Brompton mileage: 1,300 for me, 2,000 for our local green councillor. Better try harder.

It’s nice to go to Barcelona, but the lessons for what we do are all around us. I spent a day closer to home looking at some good and bad places in Edinburgh. A sample illustrated here. 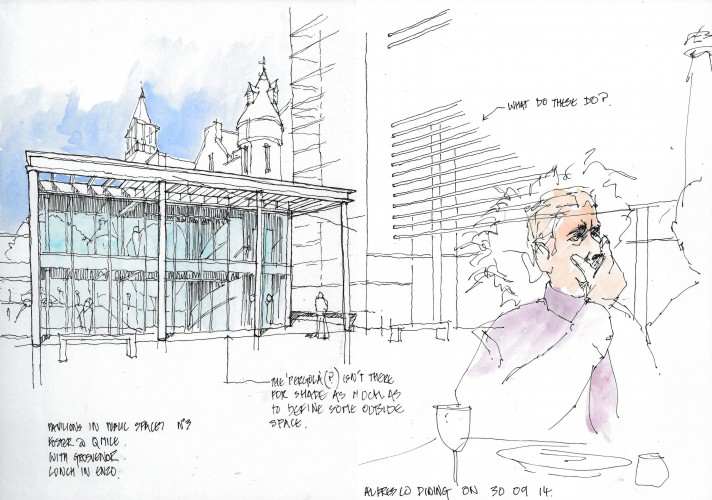 Foster at Quartermile. Head and shoulders above the other places we are making. 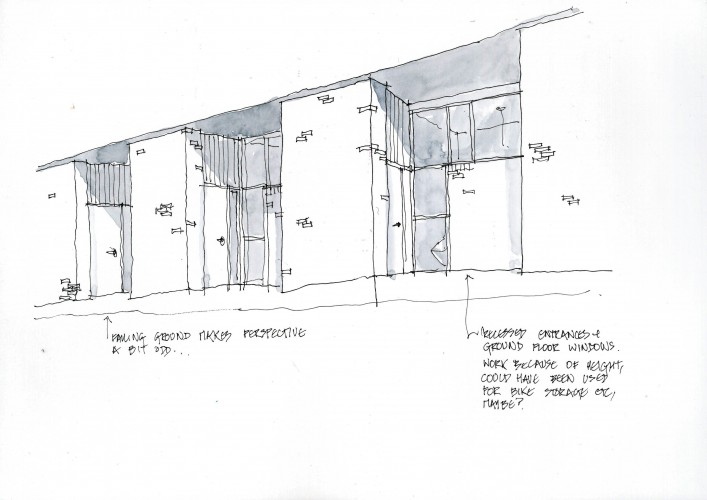 Some recessed entrances for the enquiring PfP by Cooper Cromar. 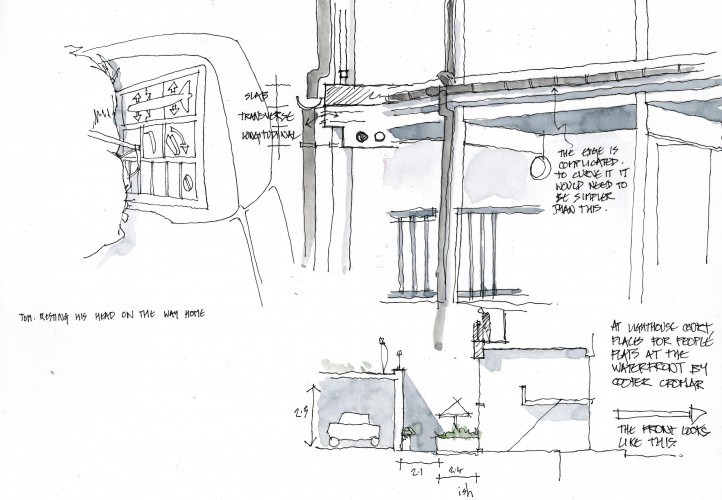 Another, neater, deck at Westfield, left.  Edinburgh’s least successful public space: Festival Square. We went and had a look to try to deduce what was actually so wrong.

I’m sitting somewhere near the Scottish border, Edinburgh side. Someone in front has been hit by a train. We’re waiting for the police. After seven years of working across the border I notice this happens when we move into Autumn and it’s darker longer, and then, most notably, as we approach Christmas. For a while, it makes a difference to how I feel about everything. But after less of a while than I’d like it seems like an opportunity to get something done, like this.